5 Tactics to Reach Your Full Potential 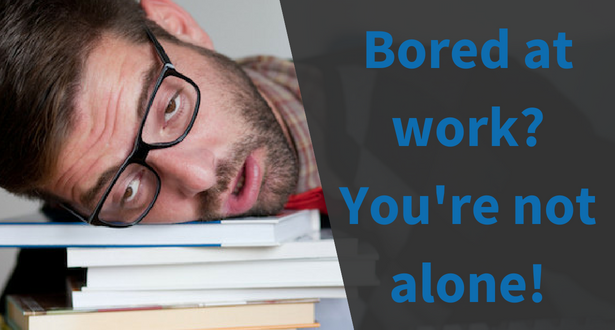 5 Tactics to Reach Your Full Potential

Bored at work: Am I alone?

If you’re underwhelmed at work, you’re not alone. In fact, more than 40 percent of employees are bored with their jobs. Boredom takes a major toll on your productivity and overall happiness. To learn more about how to take control for yourself and your employees, I spoke to Vishal Agarwal—a top global executive who spent years as a leader at GE—about his tactics for battling boredom without leaving your job.

Worldwide, there’s an innate corporate structure that leads to “underwhelm.” Large companies like GE, Amazon, Microsoft, Google, P&G, AT&T, Facebook, the Wall Street banks, and consultancies have the abilities and resources to recruit the best and brightest talent in business. If you’re at the top of your class at Harvard Business School, these companies will fight over you. Recruiting is not their problem.

Can Underwhelm be Overwhelming?

Their problem is keeping all those bright minds engaged in a way that’s fulfilling to them. “It’s a sad truth that while big corporations are great at recruiting, they’re actually weak at utilizing top talent to the best of their abilities,” says Agarwal. “Once they hire a top recruit, big corporations are horrible at embracing them, leveraging their skills, capitalizing on their strengths, keeping them happy, and building ideal, sustainable roles for them.”

This is one of the single largest root causes of underwhelm. It’s why there’s a lot of mobility between companies at the executive levels. Many executives have taken an almost mercenary-like attitude toward their career and they’ll jump to the highest bidder, from one company to the next.

Why Does Underwhelm Happen?

Even Agarwal began to feel hungry for a bigger and better opportunity. He didn’t feel challenged or utilized to the level of his experiences and capabilities. It wasn’t about title or compensation; those were in line with his expectations. So, what was the problem? Agarwal tells me his role, his leverage within the company, and a lack of intellectual challenge were his breaking points.

“They were underutilizing me,” he said. “I was capable of so much more. I can deliver mountains, but they had me shoveling piles.” That’s when he decided to make those mountains happen.

If you find yourself suffering from corporate underwhelm, here are his five tactics to consider:

Agarwal says this strategy is rooted in something his father used to ingrain in him. “In any bad situation,” he would say, “you can only change yourself. You can’t count on changing the situation or the people around you.” In other words, each of us holds the power to overcome any obstacle by looking inward, not outward.

2 – Blaming your employer will not help

If you are experiencing underwhelm, the first thing to do is pause and step back. Do not make rash decisions, such as blaming your employer. Throughout Agarwal’s career in top global companies, he heard too many executives say things like, “It’s the company’s fault this isn’t working out. They’re to blame for my skills being underutilized. They never should have hired me.”

Another rash decision that’s quite common is quitting or looking for another job. What happens if you go through all that trouble to get a different job and within a few months you’re back to feeling underwhelmed again?

After you pause and step back, go back and review your playbook. Did you set goals for yourself that are too low? Maybe that’s why you don’t feel challenged. Can you increase your goals to make them more difficult to reach? Up your aspirations? Think about ways to challenge yourself that will allow you to reach your full potential.

Study your playbook and look for hidden opportunities you may have missed. Is there an opportunity for a pivot? Can you recalibrate the playbook and get creative about reaching new or existing goals? That’s what leaders do; they constantly reassess and look for new ways to move forward. Consider new strategies. Brainstorm innovations. Just the exercise of reexamining your playbook with some of these steps will start to lift the underwhelm.

Finally, remember that you were hired because of your talents and abilities. Just because you’re feeling underwhelmed doesn’t change that. Your team looks up to you, so always act and behave like someone who deserves their admiration and respect. You have to act like a king if you want to be treated like one.