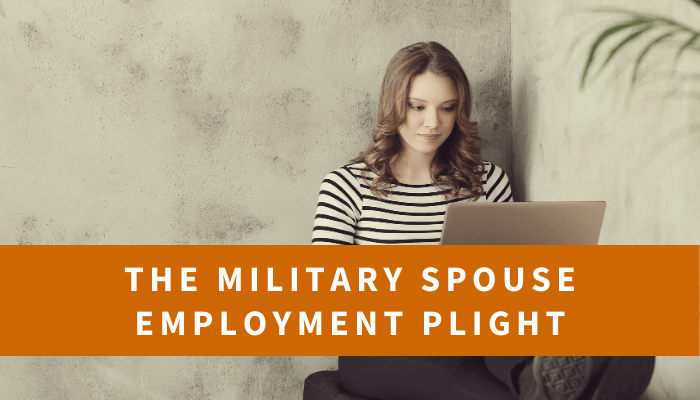 Active duty military spouses face a 24% unemployment rate. And over 31% are working part-time even if they would prefer to work full-time. Though it might sound like these are historic data points, this is current data. Our military spouses are supporting our country in a very important way, but are facing these challenges.

I am not a military spouse. But I have learned from those who are and ask that you join me in the mission to help them secure meaningful employment.

Jennifer, a client of mine whose husband is stationed in Germany, lives in a small town in Texas with their three kids, ages 14, 12 and 8. She has 19 years of experience as a research scientist in healthcare, a master’s degree in public health, and a doctorate in health sciences. She has a list of certificates, publications and memberships longer than 20 of us combined. She is currently teaching a few courses to pay the bills.

Every year, Jennifer feels like her dream career slips further and further away. In the last 11 months, she’s submitted 139 applications over two states, participated in two interviews and exhausted her unemployment benefits. Now, she’s back to square one.

Jennifer told me that there comes a time when military spouses want to throw in the towel and think that maybe they are just nothing more than a military spouse, and that’s all people will ever see them for.

According to the Department of Defense’s 2017 Profile of the Military Community, 24.9% of active-duty military spouses are 25 and younger and 13.5% are 41 years or older. Ninety-two percent are women. They are a very diverse community, varying widely in race, ethnicity, socioeconomic status, geography, education and more.

I will be focusing more on the pressing issue of military spouse unemployment in future articles, but today I want to highlight three barriers military spouses face when seeking a meaningful civilian position:

Parents of college graduates and college graduates, believe it or not, this is not the time to hunker down and say, “let’s hold off on job searching” or “it’s not the right time to job search.” Just the opposite. Students, you need to dial up your job search efforts and prepare to compete to win a meaningful job. You have invested tremendous time and money in the hope that one, your college institution will prepare you to secure employment and, two, you can pay back your college degree investment.

Up there with ageism, sexism and racism in the recruiting process (often referred to as unconscious biases), there is true “military spouse-ism.” These men and women are asked questions like, “When will you move again?” “Why have you moved around so much?” Or their applications are simply declined without being asked anything at all.

Spouses of our military service members and officers cannot work while overseas in many cases. Yet they are very active in the community, volunteering, securing advanced degrees and are the COO of their household. However, due to their backgrounds, their résumés don’t always tell the clear story of their total qualifications; they rarely get a chance to showcase their skills.

Over the last 10 years, the combined corporate effort to hire veterans has accomplished its goal and continues to make a huge impact. Although under-employment is still high for veterans and transitioning service members, it is moving in the right direction. And veteran unemployment is at just 3% nationwide.

However, for many companies, military spouses are not included in their veteran hiring metric.

What Can You Do?

Companies should strive to hire more military spouses because:

If you are hiring and welcoming military spouses, share your open positions with your local or leading national U.S. military spouse support organizations. I donate my services to a few of these, including the United Service Organizations, Hiring Our Heroes, and Blue Star Families. There are plenty more out there as well. Also, make sure your remote positions are on FlexJobs.com.

When you encounter a military couple (veteran, active duty, National Guard/Reserve), please don’t just thank the veteran, but go out of your way to thank their spouse for their support to our country. There is so much awareness-building and action we need to take for these men and women.