20 Jul Navigating the Generational Divide During Your Job Search 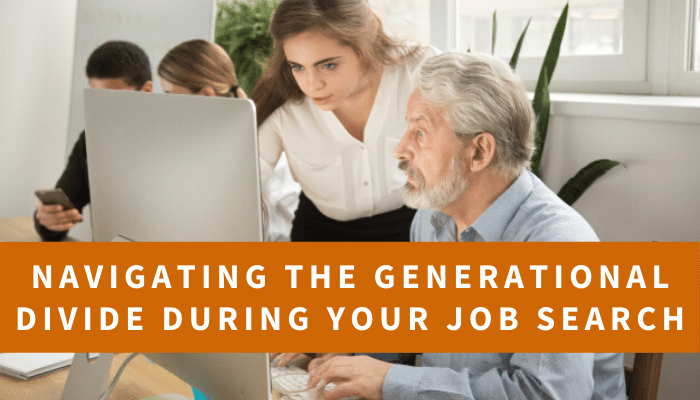 As the graduating classes of 2019 crossed the stage, a new wave of employees was ushered into today’s multi-generational workforce. Given the perceived strife between baby boomers, Gen Xers, millennials and older Gen Zers, some might think that recent grads and their soon-to-be-colleagues are gearing up for a dicey transition as generations look to collaborate and be productive in today’s workplace.

The good news? It might be easier than you think. According to a Ricoh survey of 1,500 office workers across the United States and Canada, this generational divide is a myth, with 76% of respondents stating they “enjoy working alongside colleagues of different ages.” More than 70% believe a cross-generational workplace is an asset for an organization. Interestingly, the survey also uncovered that, across generations, the majority of workers believe in their company’s values and ideals.

And though these differences are smaller than you might have assumed, I believe it’s important to understand how to work alongside colleagues from other generations, whether you’re a recent Gen Z grad or a seasoned boomer in search of a new opportunity. This understanding is especially critical when interviewing and evaluating prospective employers, as well as after you have accepted a job and are eager to develop strong relationships and succeed.

To gain this understanding, be inclusive and go out of your way to seek the perspectives of all generations. When you are forming virtual teams to solve problems, assure you seek diversity, including generational diversity. Most importantly, if you are a hiring manager or interviewer, check your generational biases at the door.

If you are searching for a new role and want to work in a diverse workplace, I always encourage job seekers to be mindful (and humble) about how their skills and experiences match what the hiring manager needs. That said, the interview session should be a two-way dialogue. I urge all prospective employees to look beyond just the salary and benefits and be inquisitive about the company and office culture when considering a new job. It is important that you incorporate your generational sensitivity during an interview, either as a strength or in a question.

There are a few ways you can go about this:

A note of caution about asking “culture-related” questions in an interview: You will likely only hear about the most glowing aspects of their culture. In my experience, no recruiter or hiring manager is likely to disclose their faults. Second, there is no one company culture, especially in medium to large corporations. Culture varies widely based on leadership, function, geographic location, and many other factors.

This is why, as a candidate, doing your research is critical. Addressing any generational questions or concerns you have is a proactive first step to learn more about the company, as well as show them who you are. Your questions or conversation during the interview could add a flavor of the cultural fit they might be looking for. However, it is important that you truly embrace and believe in valuing generational diversity.

The Ricoh study showed that almost 70% percent of office workers think the way the world does business will change in the next decade. I am personally rooting for and hoping those office workers are right. All generations need to be open-minded and flexible as they head into interview-land. It turns out you might have more in common with your future co-workers than you thought.