Negotiating the Terms of A Job Offer: A Call To Action For Companies 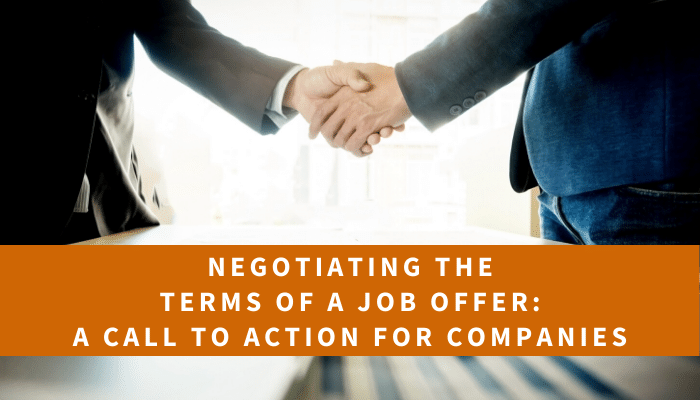 Negotiating the Terms of A Job Offer: A Call To Action For Companies

Mike is a U.S. Air Force Veteran, recently transitioned out of serving our country to pursue an internet technology (IT) career in the civilian world. He has an active security clearance, 10 years of IT management in the military and cybersecurity experience. On top of his multiple IT certifications, he has the deep leadership and execution experiences that are sought after by many companies today.

Mike is a job search skills client of mine and has a brilliant resume and LinkedIn profile. He possesses excellent networking and interview skills. He has learned appropriate job offer negotiation skills and has a gracious, polite and respectful approach to making a compensation increase request. Mike received an offer in his desired field and submitted a negotiation letter to the hiring manager and recruiter.

What Happened To Mike?

In his negotiation letter, Mike politely requested an increase of 10% on the salary offer based on his research of market-competitive salaries in his city. He presented his request promptly and professionally following my negotiation letter template. He sent the request via email and addressed both the recruiter and the hiring manager.

Then he waited. And waited.

Silence. After seven business days, he contacted the recruiter in the human resources department. The recruiter’s response was, “The position is no longer available.” Then Mike called the hiring manager who said, “We felt that you didn’t want the job because you did not accept the offer.”

Companies Should Expect Candidates to Negotiate

I’ve been on the hiring side of the table for over 30 years, building teams globally at Fortune 100 companies and startups. Partnering with recruiters and human resources departments to follow internal procedures was a balancing act I enjoyed. My favorite part was adding a personal touch to every candidate.

This sort of treatment shouldn’t happen toward someone who is hoping to negotiate. It starts at the top, and company CEOs and senior executives of all divisions and departments shouldn’t encourage this type of culture.

The company clearly wanted Mike. They moved him from the first screen into first round interviews. Then, Mike did well in the second and third round interviews. And he was chosen to receive the offer. So why would they turn around and ignore Mike’s invitation to negotiate?

Ultimately, they blamed the candidate. A company that trusts the integrity of its candidates and respects their input is one with a positive culture. This company was the opposite of that.

Of course, job seekers should be aware that a company’s goal is to find the best candidate at the mid-tier of market-competitive pay. However, it is also a candidate’s responsibility to advocate for themselves and negotiate appropriately.

For Mike, it doesn’t matter who did what. What matters is that the company he was excited to work for suddenly told him no thanks. However, Mike was right to negotiate the terms and companies should anticipate some negotiation.

Hiring managers and human resources have choices: They could respond quickly with a new offer meeting an applicant’s desires, a new offer modifying the applicant’s requests, a counteroffer indicating what, if anything, they could increase, or a polite response that the offer is final and that they still want the applicant.

But companies repeatedly miss the opportunity to uplift their brand, shine a light on their positive culture, and treat candidates with respect and gratitude.

If you are a hiring manager, be a change agent. Be that leader, hiring manager or recruiter who raises the bar on the candidate experience. It’s not so hard to do since, often, that bar is very low.

If not, you could be missing out on a great, qualified candidate.