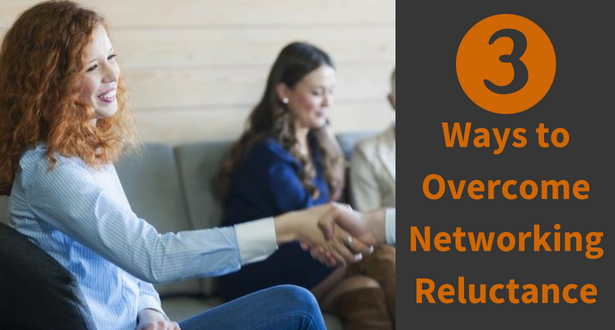 While experts may debate the exact percentage, almost everybody has heard by now that the majority of professional jobs today are filled not through published advertisements, but via personal networking. Not only do employers value the extra credibility involved when hiring through word-of-mouth referrals, but they also appreciate the lower recruitment cost and greater likelihood an individual will fit well with their organizational culture.

Despite this reality, however, many job seekers continue to be uncomfortable with the networking process and asking other people for help, favors, and introductions. For some, the challenge centers around how to ask for assistance in the right way or to characterize their situation without seeming desperate. For others, the reluctance to network comes down to pride and a feeling they should be able to get a job based on their credentials alone, without relying on relationships.

So, the question arises—what can networking-averse job seekers do to get over this hurdle and gain access to the two-thirds of all opportunities that will be filled through personal referrals?

To answer this question, I reached out to Matt Youngquist at Career Horizons, a Seattle-based career coaching and outplacement firm. As a self-described “born-again networker,” Matt has spent over 20 years studying the process of looking for work and helping people learn to build—and leverage—a powerful web of relationships around themselves in order to enhance their career success.

Matt’s suggestions for overcoming internal resistance to networking? “For starters,” he says, “it’s important to recognize that asking for help is a sign of strength in today’s world, not weakness. Few individuals have the resources to reach their goals completely on their own without assistance from a network of advocates. So if you’re still clinging to the notion that you need to be a ‘rugged individualist’ of some sort, it’s time to embrace the new paradigm and realize that most successful people didn’t get their completely on their own, despite appearances or perceptions to the contrary.”

1 – View Networking as a Research Process, Not a Selling Process.

While many people view networking in a negative light, perceiving it as a “schmoozing” or “selling” activity of some kind, Matt doesn’t believe this is the case—and a simple reframing of the concept can work wonders. “While introverts like me often feel uncomfortable directly promoting ourselves, we enjoy conducting research and seeking out answers to questions. So if you can structure your job search efforts as a research project rather than a selling activity, you’ll have more success.”

For example, you can reach out to people to learn about their industry, get advice on your resume, or ask them their opinion regarding various companies of interest. Place the focus on gathering data and soliciting advice from appropriate people, not on overtly “selling yourself” as a job candidate.

2 – Recognize That Most People Enjoy Doing Favors for Others.

If you still feel you’re imposing on people by asking them for help with your search, you might actually have things backwards. “Believe it or not,” Matt says, “There’s an old adage in psychology called The Ben Franklin Effect that suggests that the people granting people favors, rather than receiving them, are actually getting the better end of the deal. Amazingly, people like Ben Franklin were studying these exact same concepts over 200 years ago—and came to the conclusion that individuals reluctant to ask others for favors were, in some respects, selfishly denying others the chance to feel good about themselves.”

3 – When All Else Fails, Practice the Golden Rule.

Lastly, Matt suggests that if you feel uncomfortable networking with others as part of your job search, contemplate the process through the lens of the good-old-fashioned Golden Rule. Ask yourself how you’d feel if somebody asked for a similar favor in return. Would you lend a helping hand to a friend or acquaintance, if asked? If so, what types of requests would be appropriate and which might go too far and cross the line? “When you look at the process in reverse,” Matt says, “you’ll often realize how much help you’ve given to other people over the years—and gain a better appreciation for what works, what doesn’t, and what boundaries likely shouldn’t be crossed.”

At the end of the day, there’s no question that networking can be a tricky process to master for folks who are inherently shy or for those who have always had success landing jobs through their credentials alone. But as Matt and other experts advise, those professionals who conquer their lingering fears, resistance, and confusion around networking are going to be in the best position to secure long-term career success!