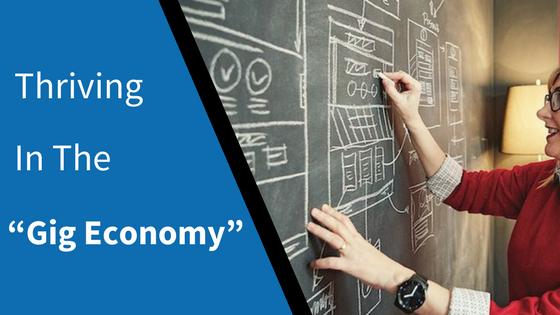 There has been so much attention on the Gig Economy in the media. Nonetheless, many people still may not have a true picture of how this important trend is reshaping the work place.

Marion McGovern, author of Thriving in the Gig Economy, was an entrepreneur who started a gig economy company matching independent consultants to projects nearly 30 years ago, before the “Gig Economy” term was coined.

Misconception #1: The Gig Economy is mostly about drivers for ride sharing and grocery delivery.

The Gig Economy includes independent workers of all kinds. Think of it as a pyramid, skills that are interchangeable, like drivers, are on the broadest part. The middle includes skilled laborers who deliver services to consumers, like plumbers and coaches, as well as those who work for businesses, like copywriters and web designers. At the top of the pyramid are highly skilled professionals like lawyers and data scientists.

The State of Independence in America study for 2017 estimated that over 41 million people work independently. While Uber has about a million drivers in the US – just a bit over 2% of the independent worker marketplace – clearly the gig economy is not just about drivers.

Misconception #2: Most people work independently because they can’t get a “real job.”

I worked with a senior independent consultant, who said he hated to go to family gatherings, because someone would ask when he would get a “real job.” Even though he earns more than when he worked at an international consulting firm, people often assume that independent work is just a stopgap. This is so wrong. 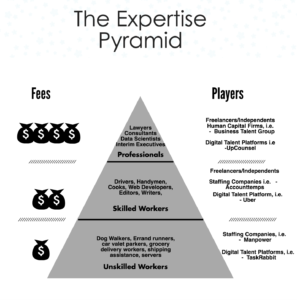 Pundits worldwide say people want to work in the gig economy because they want control: control over the work they do, when they do it, and for whom. Most gig workers maintain they are happier and healthier because independent work suits their lifestyle.

Estimates on the number of people who work independently by choice range from 70% to 83%, so clearly a majority of freelance workers have made this a career choice, not a default. In fact, 50% of freelancers have said they would not return to traditional work, no matter how much they might be paid.

Misconception #3: Millennials are driving the growth in the Gig Economy.

Although the largest growth in the gig economy lately has come from Millennials, they only surpassed the baby Boomers in 2016 as the largest segment of the Gig Economy.

Understandably, Baby Boomers at the upper end of the expertise pyramid tend to win high-paying gigs based on their extensive experience and credentials. The younger segments of the market tend to earn less. As such, in terms of economic impact, Baby Boomers remain a significant cohort in the Gig Economy.

When you are considering your next career move, don’t rule out exploring the Gig Economy.